I don’t know if you have ever had the experience of doing something for a long time and then stopping and stepping back and deliberately not doing it.

I’m not talking about breaking a bad habit, but about the things that you do, through choice or occasionally by default that often while you are doing it, you look around you and wonder if anyone else could do it or if you are actually the best person to continue it in that situation.

I stepped away from most of my church duties at the beginning of December 2012, partly because of the birth of our third child and partly because I needed some distance and a bit of a rest from all the many different things I was doing.

I wanted to have space to think, space to write (I committed to writing at least one blog post per month) and space for things that had been going round my head, thoughts to emerge and be able to expand things without time constraints. My idea was hopefully to be able to have a few developed things under my belt for when I decided was the right time to pick up some of the things that I had previously been doing.

One of the responsibilities I had previously held was of preparing all flyers, posters, promotional material etc. for all the different church activities. This included a certain amount of design, a heavy weight of time, lashings of patience and developing a diplomatic streak that I had previously not been aware I possessed. Over the last several (I can’t remember well enough to count) years, I had tried, by use of layouts, fonts and styles to develop a recognisable ‘branding’ or ‘identity’ that would make it clear and apparent to people looking at some invitation or information from The Bethel, that it was from the same place, that a thread ran through, that we were unified in our approach, not just a disparate random selection of activities with no collective or binding core. I’m not sure how well I did, but I think that by the time I stopped, the church ‘literature’ (hate that word) had some level of common, recognisable identity. In fact most of the good stuff was developed in creative partnership with real, genuine artist Sarah Gillingham (not available on the web).

When I stepped away from this, I didn’t know what would happen, I wasn’t sure whether some things would be done at all. I was anxious that it would fall back to the previous state of things not being obviously linked or coming from the same group of people.

Sometimes when you let something go, it’s hard and there is a sense of mourning in some ways, and it creates a void that looks like it might not be adequately filled.

And more often than not, stepping away from something that you are proficient enough at, to have a rest and let someone else do it becomes the best thing that you could ever have done…

…because the person who comes in to replace you is so much better than you could ever have been and they create things of genuine beauty and creative genius and if you hadn’t let go of it, they would never have had the chance.

And that’s what happened.  Thank you Tim Stock, a truly sparkling, creative mind, bulging with fresh, stunning design, with a fierce passion for fonts to match my own and rather too much interest in creating the perfect height for a parenthesis or exclamation mark.  More to the point, Tim’s natural flair and proper training in graphic design truly dwarfs my inherited / genetic and mostly cobbled together ‘design’ credentials. 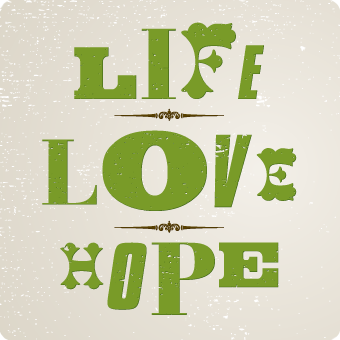 You might not believe how much I feel relieved, enthused, excited, like a weight has been lifted, like I know that I can pass everything over into some really good hands. The first genius stroke was the design for the ‘life love hope‘ Easter programme we put on. The web page doesn’t really give the design the credit it’s due, the print media was just brilliant.

Maybe you can learn from my experience. Maybe there’s something you need to let go of to allow someone else to take on and fulfil their potential. And maybe the results will be more incredible than you could ever imagine.

I was reading the story of the wilderness journey and the construction of the tabernacle and it made me think about the ‘Ark of the Covenant’.

Whilst initially, the construction of the gold-covered wooden box with cherubim either side might look like Israel’s version of an idol, this building directive is in stark contrast to the culture around them at the time, a culture of images / idols carved out of wood or cast from precious metals.

The difference that drew my attention was this:

God requested a seat to be made for him to come and meet with the representative of the people. (at this stage it was spoken to Moses but later on it would be the high priest).

God didn’t want anything to be made to represent Him, or something that could be worshipped in itself, he wanted somewhere to ‘sit’ while he talked with the people.

The box is not the important bit, nor is the ‘mercy seat’, but the one who comes to sit on it and be with his people.

It reminded me of a ‘voice of the day’ from the ‘God’s Politics’ Sojourners web site.

The resurrection of Jesus was simply God’s unwillingness to take our ‘no’ for an answer. He raised Jesus, not as an invitation to us to come to heaven when we die, but as a declaration that he himself has now established permanent, eternal residence here on earth. He is standing beside us, strengthening us in this life. The good news of the resurrection of Jesus is not that we shall die and go home to be with him, but that he has risen and comes home with us, bringing all his hungry, naked, thirsty, sick prisoner brothers with him.

God came to be with the people of Israel as he sat on the ‘mercy seat’ (mercy being a good word worth looking up yourself), in amongst the grime and muck of a wilderness nomadic community.

God sent His only Son, who emptied himself (Philippians 2:7) of himself and filled himself up with his Father, into a world full of the grime and muck that came with roman occupation, torture, military dictatorship etc.

God promises to come to the earth again (Revelation 21), (not that he has ever left – “one God and Father of all, who is over all and through all and in all” – Ephesians 4:6) not to whisk people away to somewhere else, but to live with them and be their God in and amongst them, initially at least – in and with the grime and muck of the 21st century, in all the mess that we have allowed our world and lives to get into.